The Call-for-Papers from the Nineteenth Century Theatre and Film group at the University of Warwick for the City, Space and Spectacle Conference at their Venice Campus on 8-10 June 2018 in the Palazzo Pesaro-Papafava was just too attractive to be missed. The OBERTO team therefore turned out in full force: Anna Maria Barry, Barbara Eichner, Tim Lloyd and Alexandra Wilson submitted a joint panel about the “Operatic City”, whereas Andrew Holden’s paper on “Rome’s Reception of Religion in Opera 1870-1900” was accepted independently and formed the final presentation in the “Religion and Morality” panel. 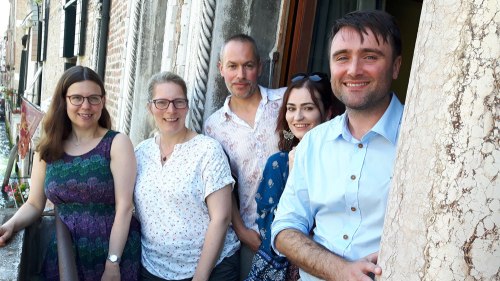 The conference was dedicated to the memory of Michael Booth, whose ground-breaking book Victorian Spectacular Theatre (1981) ushered in a new era of theatre studies that was less concerned with great playwrights and their works, but instead foregrounded audiences experience, practicalities of staging and the taste for spectacle, particularly in 19th-century London. Many panels were therefore offered enticing topics such as nautical battles on stage, Victorian dancers or the theatrical interpretation of the Whitechapel murders, but there were also presentations about theatrical performances aboard ships and in Napoleonic prisoner-of-war camps, royal ceremonies in Turin and Warsaw, or the famous Hanlon Brothers, an American family of artistes who toured the world exhibitions. Our colleague Michael Burden from Oxford University added “Operatic Cities under Siege” to the theme of staging large-scale catastrophes which pervaded the conference.

Our OBERTO panel, amiably chaired by Michael Pisani (Vassar College, US), started with Alex’s interrogation of “Puccini’s Paris: City of the Imagination?”, where she argued that Puccini’s La Bohème built on and in turn contributed to the cliché of Paris as the “city of love”. Barbara compared the cityscapes of Rome and Nuremberg in Richard Wagner’s operas Rienzi and Meistersinger and connected their representation on stage with the expansion of city tourism in the 19th century. Tim Lloyd read the reception of Jules Massenet’s early operas at the Palais Garnier against the contemporary Expositions Universelles, which upped the stakes for visual spectacle on the one hand but also made spectator wary of visual excess in opera on the other. Anna’s paper charted the adventurous travels of tenor Michael Kelly, whose antics off-stage were read through the lens of his operatic roles. Finally, Andrew challenged traditional assumptions about the anti-clerical agenda of late-19th-century Italian opera, with particular attention to the first performance of Tosca in Rome and its reception by Catholics in Rome. This drew unexpected parallels with Leanne Waters’ paper (University College, Dublin) on fin-de-siècle literature and stage adaptations in London, including The Sorrows of Satan.

Apart from getting to know many colleagues in theatre studies from the UK, the US and Europe and networking about all things operatic, we also took the opportunity to see some of the sights of Venice, from the Piazza San Marco (at night to avoid the crowds) to the Gothic church of I Frari to the Palazzo Vendramin, where Wagner died – now ironically the municipal Casino of Venice. The city also offered some opera-themed exhibitions: the artworks of Mariano Fortuny in the Palazzo Fontany, including set designs for the Italian premiere of Tristan und Isolde), and an exhibition on the relationship between Eleanora Duse and Arrigo Boito at the Fondazione Cini. Serendipitously, Teatro La Fenice also held a memorial concert during the weekend to conductor Sir Jeffrey Tate.