OBERTO staff were delighted to welcome Michael Volpe, General Director at Opera Holland Park, to Brookes on 20th June to receive an Honorary Doctorate in Music. 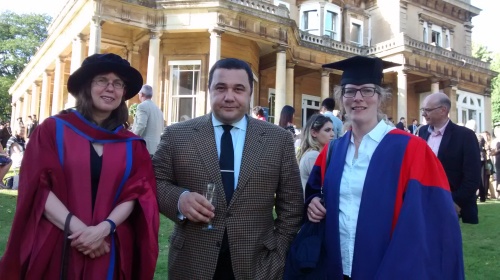 Michael Volpe joined the Royal Borough of Kensington and Chelsea in 1989, where his role was to promote local cultural institutions. Within a few years he had persuaded the Council to start its own opera company. Opera Holland Park is now one of the UK’s most thriving, respected and artistically innovative opera companies. As General Director, Michael’s numerous duties include repertory choice, strategic planning, fundraising, communications and all general aspects of creating the festival infrastructure.

Michael is a powerful advocate for the transformative nature of education. He attended an unusual state boarding school, which took inner city boys and gave them an education rich in music and drama. Since then, he has dedicated himself to promoting opera as something everyone can enjoy. He is a regular voice in the national press and his recent memoir Noisy at the Wrong Times is a passionate plea for the arts to be taken seriously in schools. Michael has spoken at several OBERTO conferences and we look forward to collaborating with him again in the future. We consider him to be a superb role-model for our students. The full text of Michael’s speech can be found below.

It is with great surprise and pleasure that I come here today to accept this honorary doctorate, the giving of which is met with more pride than I can actually express. To be recognised by an academic institution is not something I ever thought possible as I grew up. My two oldest children have achieved far more than I have in academia, but, as a competitive Dad I just want to say to them…erm, Doctor?!

I am also honoured to be here on what is a great day of achievement for all of you and I have been asked to speak to you with the intention of inspiring you. Perhaps the best thing I can do is ask you to look at yourselves for inspiration: I can say that all of you, by dedicating yourself to your degrees, by showing the commitment and desire, have already achieved a great deal more than I ever did.  You have much to feel proud of yourselves for and if it helps to use my own failures as inspiration, I am happy to allow you to do so.

Over the next ten years, our children, and thus your future audiences, customers or collaborators will leave school less cultured and knowledgeable of the arts than ever before. The proposed new eBacc doesn’t encourage careers in the arts and as a nation, the country of Shakespeare, we don’t truly put the arts alongside other subjects. We are making it extra-curricular.  And the world is largely an electronic one, which may encourage you to go into media arts, or become social media gurus. I suppose that you are all children of the digital age too. But don’t despair at any of these realities, which I am well known for doing a lot of moaning about. The world is still full of human beings. They may communicate in different ways but our emotions and our responses haven’t changed. Our chemistry HAS survived Twitter.

Having taken an arts degree, you may still end up doing something unrelated, as do many people in the working world, but I contend you will be better at it. I was lucky enough to attend a school that put cultural education at the very heart of its academic life, with the highest standards possible. I was the world’s worst pupil, but not when I was on stage, or singing or drawing. I came from a poor Italian family who came to this country in the fifties. Neapolitan songs were our house soundtrack, a bit of opera by Mario Lanza perhaps. The effect that theatre and music had on me as a truculent teenager was startling in its transformative power. And when I used to go to football matches at Chelsea, I might have been the only person there who knew that the abusive song we were all singing was based on the Libiamo from La Traviata. It felt good knowing that.

And culture defines our histories. We recognise decades and centuries largely by the culture of the time. Culture is at the core of humanity, it isn’t just a hobby a few of us have. Every single person on the planet is touched by the creativity of others, whether the most rapacious business that needs a beautiful logo and a well written brochure or the most primitive tribes on the planet who sing together around the fire. The fact that we spend so much of our time in the arts trying to make this point to the government is actually absurd. The irony of it struck me last week when the Education Secretary, Nicky Morgan, was a guest at Opera Holland Park. Now, she was our guest, on a rare night off, and it wasn’t appropriate for me to voice my opposition to some of her policies too heartily, but she was keen to read my book about the school I went to, and my inscription to her in it was restrained and genuine. But I offered my services should she want to discuss the issue of cultural education. She was eager to read the book on her summer holidays, so perhaps in September, we will see some surprising policy reversals from the government.

But there we were, a poor, immigrants’ son, with a party that included two distinguished lawyers, a government minister, the leader of the wealthiest council in the country and a distinguished former chair of the V&A friends, at an accessible opera festival that I founded and which has generated millions for the local economy – and they were all very pleased that I had taken the time to visit them at their picnic table.  I think the irony of it may not strike the minister until she has read the book, but I have always been amazed at how what I do, rather than divide classes, actually brings us together in collective appreciation of something beautiful.

In fairness, I think the government believes what it says about the arts, but ultimately, it isn’t something they can control or do much harm to. The world cannot exist or function without the creative industries. I think – and hope – that people like you will always follow your hearts and gifts and talents. It is something we don’t, and can’t, control.

If you do pursue a career in a creative industry, I will always encourage you to engage in work that speaks in a human way to your audience, but above all, whatever you decide to do in the years to come, your over-riding aim should simply be to believe fully in what it is you are doing. And don’t chase what someone else tells you is what the ‘audience’ or market ‘wants’. Always do your best to expose them to more, to the new, to the challenging. You yourselves can determine how your work, your efforts and your passions will affect the lives of others.

As for your careers and how to negotiate them, there is no great secret to it. I will offer a few pointers to if not success, then a comfortable sense of honest endeavour. The lavishness of any consequent success is up to you and your talent.

There is a difference, however, between blowing your own trumpet and blowing someone else’s for them. The world is full of egomaniacs who will want to take credit for your achievements, for your creativity, your talent. Be secure in the knowledge they have done it because they want the reflected glory. That is your reward, along with the satisfaction of the achievement.

You have all achieved a great deal already. But you have so much to learn. That isn’t meant to patronise you, because if you are clever, you will realise that you never, ever stop learning. All the best among us would agree with me.

Congratulations on your graduations and good luck.